Here we not only introduce a book but a colonialist theory that it carries with it. David Pingree has used the Yavana Jataka as his reason that Indian Astrology was imported from the Greeks.

The reason for this is use of Greek loan words, similar techniques in Greek texts, and the belief that Hellenist Greeks and Romans invented Horoscopic Astrology.

The faults with this is the obvious fact of Geography, historical trade routes, historical political interaction, the fact that only 20% of the Yavana Jataka is similar to Greek Astrology and unlikely that 80% was made up by the translator at the time of translation, and fact that Northern India spoke Greek as a second language during the time of the text, and the reinterpretation of Varahamihira without colonial intent to devalue Indian sciences.

Prof. Shrikant Bahulkar discusses the one-way-transmission thinking found in Sanderson’s work related to the Shaiva origins of certain concepts in Mahayana Buddhist literature when similar elements can be found in other sources.[1] He discusses others who disagree with a unidirectional view: Ronald M. Davidson, in Indian Esoteric Buddhism, discusses the flaws in Sanderson’s thinking and states that decisions on borrowing are best made on a case by case basis rather than corpus by corpus. He argues that a reciprocal appropriation model will prove the most fruitful.[2] In the introduction to the Chakrasamvara Tantra, David B Grey discusses how Yogini texts were influenced by Shaiva practices, but warns about making simple origin statements about a complex subject when not all original surviving literature has been critically edited and published.[3]  David Seyfort Ruegg also refutes Sanderson’s view while discussing syncretism and synthesis with Buddhism and Hinduism throughout South Asia.[4] He considers such generalizations based on small points of evidence as not able to cancel out the fact that the religions shared common grounds of locality. These scholars argue against a thought process that there is a one-way transmission of a superior religion or people to another less capable one. This post-civil rights thinking is outdated. The uni-directional view of David Pingree has been refuted by many scholars, and is both outdated in mode of thought and theory. We must understand that the ancient world was communicating and sharing ideas on a regular basis and that there was reciprocal exchange of knowledge.

[4] David Seyfort Ruegg, The symbiosis of Buddhism with Brahmanism/Hinduism in South Asia and of Buddhism with "local cults" in Tibet and the Himalayan region (Journal of the American Oriental Society, 129.1, 2009). http://hw.oeaw.ac.at/6057-1

Below are some videos discussing the time and location in which Yavana Jataka was written (with Resources at the bottom of the page):

THE TRANSMISSION OF GREEK ASTRAL SCIENCE INTO INDIA RECONSIDERED - CRITICAL REMARKS ON THE CONTENTS AND THE NEWLY DISCOVERED MANUSCRIPT OF THE YAVANAJĀTAKA  Bill M. Mak

Since Pingree's 1978 publication of his work on the Yavanajātaka, the text had established itself as one of the most important historical documents in various fields of Indology, from the history of mathematics and astral science, to Indian chronology and historical contacts among ancient cultures. A number of Pingree's discoveries concerning the text were widely quoted by scholars in the past decades. These discoveries may be summarized as follows: The Yavanajātaka was an astrological/astronomical work composed in 269/270 CE. by Sphujidhvaja, an "Indianized Greek" who lived in the realm of the Western Kṣatrapas. The work was a versification of a prose original in Greek composed by Yavaneśvara in Alexandria in 149/150 CE. The work, though highly corrupted and clumsily expressed, contains algorithms of "ultimately Babylonian origin" and the earliest reference to the decimal place-value with a symbol for zero (bindu).
Pingree's discoveries were based largely on readings from the last section of the Yavanajātaka, described by him as "Chapter 79 - Horāvidhiḥ", an exposition of mathematical astronomy. In the recent years, scholars including Shukla (1989) and Falk (2001) pointed out some major flaws in some of Pingree's interpretations and reconstitution of the text. However, further progress of a proper reevaluation of the controversial contents of this chapter has so far been hampered by the lack of a better manuscript. In 2011-2012, additional materials including a hitherto unreported copy of the Yavanajātaka became available to the present author. This paper will therefore be the first attempt to reexamine Pingree's key interpretations of the Yavanajātaka, focusing on this last chapter, in the light of the new textual evidences.

Understanding the World at the time of the Yavana Jataka:

Alexander the Great in Iran

Buddhism in Gandhara at the time of Alexander

Bactrian artifact with the Buddha from the time of king Vasudeva.
Ai Khanoum Papyrus

Greek Art in Gandhara
"It was Alexander the Great’s expedition to India, however, in 330 BC, which was one of the most influential factors in the spread of Hellenism in Central and South Asia. When he arrived in Bactria one year later, he founded
four cities, before moving onwards into Sogdiana and creating more cities. Here, he turned southward towards Gandhara, crossing the River Indus in 326 BC, and was received in a hospitable manner by the ruler of Taxila."

Greek Culture in Afghanistan and India
"Alexander spent most of the years 330–325 campaigning in Afghanistan, Pakistan, and India, and he left behind Greek kingdoms and culture that flourished throughout the Hellenistic period and even later. Traces of these
Greek kingdoms are continually coming to light and the archaeological, artistic, and epigraphic evidence coming out of Afghanistan, Pakistan, and India reveals a prosperous and culturally diverse kingdom. In this article, I will explore questions of identity and cultural interaction in the Greco-Bactrian and Indo-Greek kingdoms by examining five inscriptions, or groups of inscriptions."

The culture of Greeks in India
"The present study examines the construction and assertion of Greek identity in the Hellenistic period (c. 323–30 bce) colonial settlements of Bactria and Arachosia (modern Afghanistan), exploring what it meant to the Greek immigrants and their descendents to be ‘Greek’, and how they chose to assert this identity through public display, in architecture, ritual and inscriptions. Much of the archaeological and epigraphic material from the region immediately strikes the modern, classically-trained observer as conspicuously non-Greek, and there is evidence to suggest that this is also how it would have appeared to a contemporary observer from the Greek lands of the Mediterranean littoral. The elements of ‘Greekness’ that the settlers chose to maintain and discard are, however, in themselves suggestive of a flexible and evolving sense of ethnic belonging, which sought to assert Greek cultural and civic identity only in very specific arenas."
The Origins of Coinage in India
The history of coins in India shows not just the history of coins, but of how India interacted with the world. "This paper explores the history of almost two and a half thousand years of coinage in South Asia as an extension
of my thoughts on the problems of the chronology of India’s first coins."
Kushan carvings
Kushans discussing India in Greek fontThere was a mix of languages as noted by the names and titles from Kuṣāṇa times
"The seals and published documents found in the area stretching from Uzbekistan to the Ganges plain during the period between the first and sixth centuries CE preserve the names and titles in many languages, including not only Chinese and Greek but also a number of languages of Iranian origin, amongst them Bactrian, Sasanian and Sogdian, as well as others vaguely labelled Śaka. In addition, we have Sanskrit, Gāndhārī and possibly also Turkish and Arabic."
Excerpt from Genesis of the Indian Planetary Deities
The excerpt is highly influenced by David Pingree's Greek to India theory but has other relevant details. 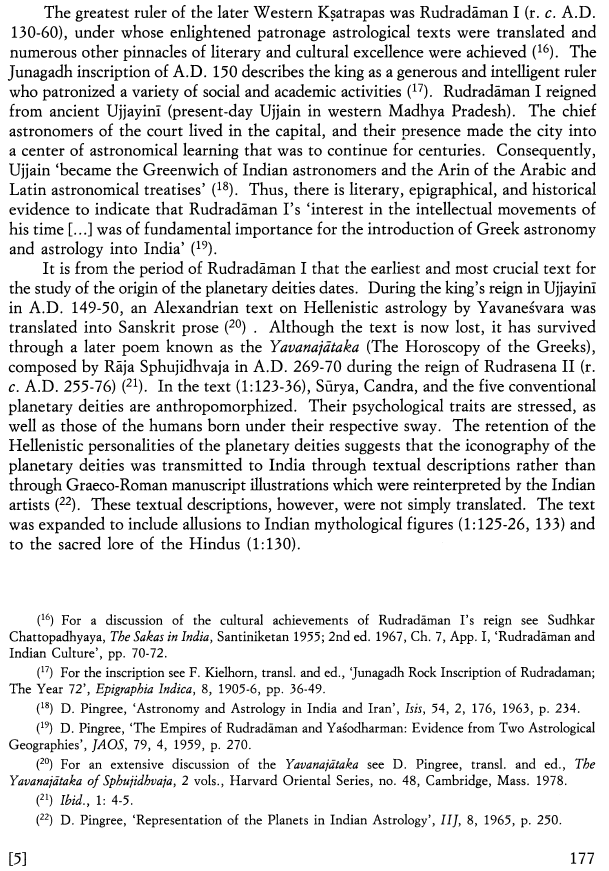 And Indian Culture in Greece: